How to Read this Chart 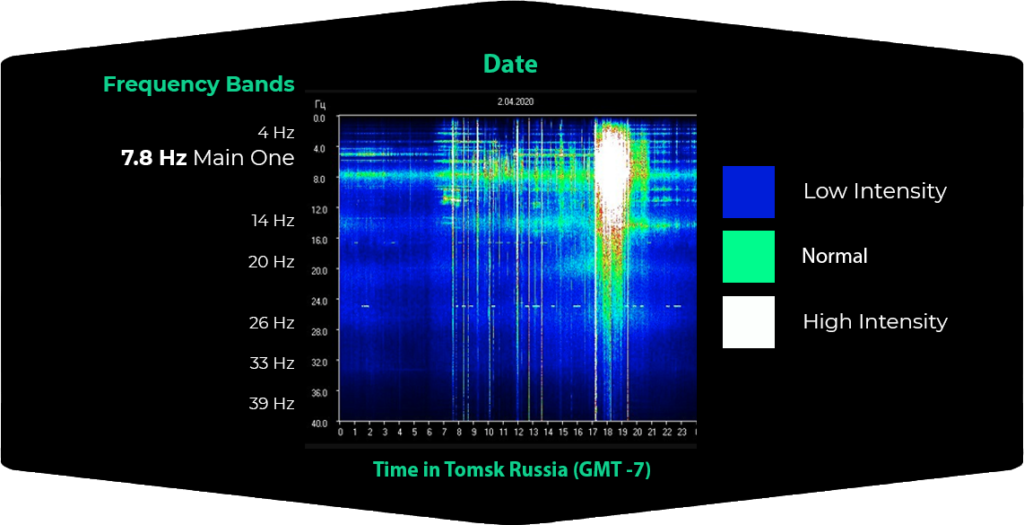 What is the Schumann Resonance?

The Schumann Resonance is nicknamed the “heartbeat of mother earth” and can occur in bands which match up to the ranges seen in our brainwaves.

There is an atmospheric cavity between the earth and the ionosphere. Every second about 1000 lighting flashes around the globe harmonize these pulses which travel around this pocket sending electromagnetic energy signals to all microorganisms.

These signals couple us to the Earth’s Magnetic Field and are also thought to be inversely influenced by the mass emotions and the sum of human consciousness.

Humans are tuned to the resonant vibration of earth. “Human beings vibrate, (yes that means you) and the frequency they emit ranges from 5-10hz. We are in the same range as the 7.83hz of the earth. (Source)

This is why nature is healing to people. It helps them match the earth frequency of 7.83 which boost the body’s natural ability to heal and regulate itself.

“Krylov suggests that the Schumann resonance may not only affect telecommunications services but can also affect melatonin influencing biological functions such as the circadian rhythm of both animals and humans. Not only does melatonin regulate sleeping patterns, but also regulates blood pressure and reproduction too.” (Source)

The fundamental Schumann Resonance, 7.83 Hz, corresponds to the high theta of the human brainwave range. 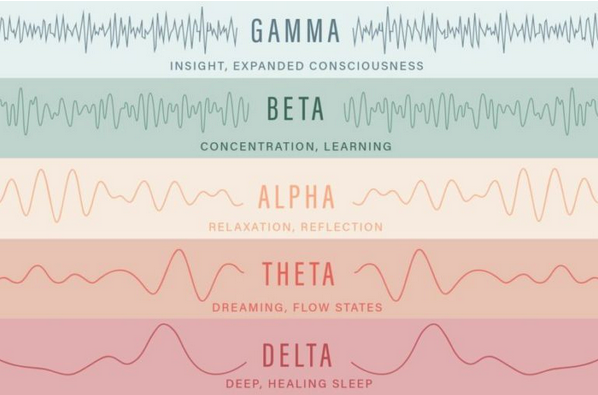 0 Hz to 4 Hz corresponds with SR 4.11 Hz
This brain rhythm occurs in a deep dreamless sleep or unconsciousness. This is associated with drowsiness.

4 Hz to 8 Hz corresponds with SR 4.11 Hz, SR 7.83 Hz
This brain rhythm is associated with drowsiness. It also occurs at the first stage of sleep and during deep meditation, when we are awake but open to mental imagery. It has been associated with creativity, intuition, daydreaming and fantasizing. It is believed to reflect activity from the limbic system and increased activity is observed in anxiety, behavioral activation and inhibition.

Normal Schumann Resonance is here at 7.83 on the edge between Theta and Alpha

8 Hz to 12 Hz corresponds with SR 7.83 Hz
This is the major rhythm seen in a normal, relaxed adult. It is present during most of life. It is considered a common state during alertness but not actively processing information. Alpha has been linked to creativity (creative people show alpha when listening and coming to a solution) and mental work. Alpha activity is also associated with overall mental and body/mind coordination, calmness, alertness and learning.

30 Hz to 100 Hz corresponds with SR 33 Hz, 39 Hz, 45 Hz, 59 Hz
This is associated with waking states and can occur when we are simultaneously processing information in both brain hemispheres. Whales and dolphins also operate in these frequencies.

*There are differing opinions among authorities as to the demarcation between upper limit of beta and onset of gamma brainwaves. Some cite 25 Hz, others 40 Hz. Most seem to cite 30 Hz. Just know that upper value is a bit fluid.

Vibrational frequencies can match or harmonize with another.

The Schumann resonance may be better understood when examining matching vibrations. When a system of oscillators is tuned, one oscillator will affect the other. When one starts to vibrate, the other will eventually vibrate in harmony or at the same frequency.

Entrainment is the process whereby two interacting oscillating systems, which have different periods when they function independently, assume a common period. The two oscillators may fall into synchrony, but other phase relationships are also possible.

This creates “entrainment” or “kindling”. The word kindling refers to the matching of neurons across the brain creating synchronicity. Meditation keeps our coupling with the Schumann resonance or the fluctuating frequency of the earth.

Resonance “occurs when a given system tuned to a certain frequency begins to oscillate or amplifies the presence of a preferential external frequency. Those frequencies that maximize or amplify a given object tuned to a specific frequency are called resonant frequencies. Together, two frequencies have the power to influence each other, if both are tuned in concordance for resonance.”

Many cultures implement vibrational techniques in hopes of synchronizing with the frequencies of the Schumann resonance, or the ‘heartbeat of mother earth’. They believe that these frequencies can heal the body and mind as energies connect. Even in the ebb and flow of these energies, high blood pressure is reduced and depression is somehow alleviated.

By syntonization brain waves to the fundamental Schumann frequencies (7.83 Hz), which is done through brain stimulation devices such as brain machines, music or meditation, we can benefit from a huge energy intake from the Earth’s own energy field.

What is frequency and amplitude in the vibration?

How does Schumann look over time?  These two charts show what April, March and February of 2020 look like.  Go to the source at disclosurenews.it to see more strips. Their archives go back to December of 2019. This group also posts daily updates on the Schumann Resonance.

On January 31, 2017, for the first time in recorded history, the Schumann resonance reached frequencies of 36+ Hz. It was considered an anomaly when in 2014 this frequency rose from its usual 7.83 Hz to somewhere in the 15-25 Hz levels—so a jump from 7.83 Hz to 36+ Hz is a big deal. That’s more than a five-fold increase in resonant frequency levels. Nobody knows why the spikes are happening.

When the Schumann Resonance is more intense, human consciousness is thought to be affected. When at normal levels at 7.83 (while in nature without electromagnetic smog) human brain waves are thought to match that vibration and experience healing.

When the Schumann resonance spikes, human biology is affected — especially in our third eye, the pineal gland. According to neuroscience, frequency recordings of 36+ Hz in the human brain are more associated with a stressed nervous system than a relaxed and healthy one.  (source)

However, some believe spikes may help people clear blockages, adjust to a new vibration and expand our consciousness and awareness.

Why is it Spiking?

“It is now believed that many of the Schumann resonances transients (Q bursts) are related to the transient luminous events (TLEs). In 1995 Boccippio et al.[38] showed that sprites, the most common TLE, are produced by positive cloud-to-ground lightning occurring in the stratiform region of a thunderstorm system, and are accompanied by Q-burst in the Schumann resonances band.” (Wikipedia)

In addition to intense lightning and TLEs, plasma excitations could also be caused by:

Some speculate human consciousness en mass can also affect it.